This article is the first in a series following the launch of the Neuroscience IPU. Staff who specialize in stroke care from across the CIUSSS have come together to form a single inter-disciplinary team to provide stroke survivors with timely, customized care.

The danger had passed: the stroke patient was stabilized.

In the era before the CIUSSS was formed, each stage of a stroke patient’s recovery was handled by a different group of specialists. No matter that each of these teams—whether in a hospital Emergency Department, on a dedicated stroke unit, in a rehabilitation facility, or even back in the patient’s home—was providing top notch care. Once the patient was ready to transition to the next phase in their therapy, all too often they had little idea who, or what, awaited them. Because in all too many cases, neither did the team that was discharging them.

“The lack of information of what came next, it was a big problem,” attests Luis, a stroke survivor. “Many times, just as you were ready for a new step, it was a jump into darkness.”

Today the situation is much improved, thanks to the development of the Neuroscience Integrated Practice Unit (IPU) specifically targeting stroke care, which launched this summer.

“Previously, our teams worked well together, but we were separate,” says Malgorzata Karna, the Interim Nursing Clinical Consultant in Neuroscience at the Jewish General Hospital. “We were good, but we wanted to become excellent. So we set down this path.”

“Everyone providing care along the stroke trajectory now belongs to one team. We may be based at different sites, but for all practical purposes we work alongside one another. The IPU is all about building a personal connection.” To do that, Ms. Karna explains, clinical and non-clinical team members reach out to one another regularly to discuss specific cases, whether over the phone, digitally, or in face-to-face meetings whenever possible.

“Once you open those lines of communication with your colleagues and get to know one another better, you learn about each other’s approach and preoccupations,” said the CIUSSS Associate CEO Francine Dupuis, addressing the stroke team at the IPU launch this past summer. That familiarity helps the stroke team to rapidly coordinate the best possible care for the patient throughout their recovery—and, when necessary, during their relapse—regardless of their location. “Together,” adds Ms. Dupuis, “we have more knowledge than alone.”

The process to strengthen the continuum of care for stroke patients predates the CIUSSS. It was formally set in motion in 2012, when the Health Ministry developed a stroke-trajectory strategy. Many bons coups within facilities caring for stroke patients followed in close succession. In 2013, the Richardson Hospital (a rehabilitation facility now belonging to our CIUSSS) was the first organization in Quebec to be recognized by the Accreditation Canada Stroke Distinction program.

The following year, the-then Quebec Health Minister, Gaétan Barrette, visited the JGH as part of a plan to designate the acute-care hospital a secondary stroke centre. Always with a view to improving patient care, committees and work groups were created to nurture close collaboration between the JGH and yet another rehabilitation site that is part of our CIUSSS, the Constance-Lethbridge Rehabilitation Centre. These teams studied specific cases in which the client had not received the desired standard of seamless care, to identify weaknesses or gaps in the continuum. Their goal was to create the smoothest possible transitions by shoring up their communication with clients and exchange of information with colleagues.

These early ties between teams across the sites were making headway with patient outcomes, attests Felicia Guarna, the CIUSSS Director of Rehabilitation. One notable improvement was in the reduction of the delay between the onset of stroke and in-patient rehabilitation, which dropped from 25 days to 18 days.

In parallel, important improvements within the JGH itself were underway. The Neurosciences Department directed its focus to providing stroke patients with the right care at the right time, delivered by the right healthcare professionals.

To that end, in the year 2015 a quick-response notification system was put in place to mobilize all of the relevant JGH specialists (the stroke team leader, neurologists and a radiology technician) to treat an incoming patient the moment an ambulance pulls into the Emergency Department.

“We have a maxim in stroke care, ‘Time is brain’,” explains Dr. Jeffrey Minuk, JGH Chief of Neurosciences. “The sooner we’re able to restore blood flow to the brain, the less neurological damage a patient will sustain. With the introduction of the Code Stroke, a newly arrived patient could be evaluated, scanned and treated within just over 46 minutes. That’s a significant drop from the 90 minutes that were needed previously, and well within the Canadian health guidelines target of 60 minutes.”

“Consider the implications of rapid intervention,” urges Dr. Minuk. “The immediate advantage is, potentially, a shorter hospital stay, ideally a maximum of seven to ten days. That not only reduces the patient’s risk of contracting a hospital-acquired infection, it also frees up a bed for another patient requiring care.”

By 2016, the JGH succeeded in becoming accredited by the government as a secondary stroke centre. As one of four Montreal-area hospitals to receive this designation, it offers a higher level of stroke care expertise and performance. The team earned this title by implementing measures that, similarly to the Code Stroke, placed the patients in the hands of the right people at the right time, so that they could receive optimal care.

This meant reducing how long a stable stroke patient had to wait in the Emergency Department before being transferred to the Stroke Unit. Notwithstanding a higher volume of patients, that time was reduced, thanks in part to the relocation of the Stroke Centre at the beginning of the year to the 10th floor of state-of-the-art Pavilion K. On K10, twenty-four private beds await stroke and neurosurgery patients, who could now receive high-intensity monitoring outside the ED setting.*

“We’ve had an organized approach to stroke care at the JGH since 1983, when we had a single nurse and one neurologist making up our team,” recalls Dr. Minuk. “Now, of course, with a greatly expanded team of professionals across many facilities, we operate on a completely different scale.”

*A protocol is also in development for patients who have a stroke in the hospital on any of the floors, such as the Geriatric or Medicine units.

Today, a stroke patient on K10 receives a visit from a physiotherapist or occupational therapist within the first 24 hours following admission. If that timeline coincides with the weekend, they will now also be seen by an OT or PT. “We’re available to continue to treat patients in daily sessions,” says PT Reshmi Varghese, gesturing to a bright, airy and fully equipped room.

These and other members of the inter-disciplinary stroke team based at the JGH—which also includes the stroke coordinator, nurses, a speech pathologist, dietitian and social worker—gather at the bedside with the patient and their family three days after admission. “It’s a really nice opportunity for them to ask us questions. They want to know, ‘Will I recover? What can I expect next?’,” says Ms. Karna. 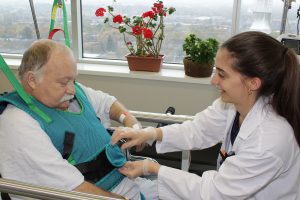 During the session, they formulate the Interdisciplinary Individualized Intervention Plan (PIII) to identify the problems caused by the stroke (for instance, the patient cannot move their left side); the objective, such as being able to remain seated at the edge of the bed without support for one minute; the required intervention to accomplish that goal, perhaps the strengthening of control over the trunk of the body; and finally, the team members that will help the patient to achieve this target, such as a physiotherapist or occupational therapist.

“This meeting, early on, helps us to develop a customized plan together, to be sure that we take into account the patient’s expectations during their stay,” explains Ms. Karna. “We can make sure, to the extent possible, that we work with the patient and their loved ones toward those goals.” This might involve, for instance, the speech therapist and dietitian helping a patient who wants to focus on eating.

Any major concerns for the day are discussed in morning ’bullet rounds’, which are attended by all members of the stroke team. The assistant head nurse, stroke team leader and neurologists perform daily rounds to review the progress of each patient, to troubleshoot any medical problems, and to prepare plans for discharge. Meanwhile, care for non-neurological medical conditions is provided by a group of dedicated general practitioners known as GP Neuro. If the patient has not suffered any significant impairments as a result of their stroke and does not have any serious complications, they will be discharged home.

To screen these milder stroke patients at every step in their recovery, a new position was created at the JGH Stroke Secondary Prevention Clinic. An Ly, a nurse will follow up with the discharged patient over the phone to answer any questions they might have. “It was not unusual for me to receive calls by patients once they returned home,” says Ms. Karna. “They might have forgotten certain instructions about their medication, or have questions about the link to out-patient rehab, or wonder when they would be contacted by their CLSC.”

In the three-to-six-month period following discharge, the patient then visits the clinic to further discuss any concerns, such as how to manage their return to work. At this time, the nurse will conduct a screening for the presence of fatigue, as well as for depression to catch the one of every three patients at risk in the two years following their stroke. In addition to carrying out reassessments, the nurse directs patients to any frontline services within the CIUSSS that might be helpful to them to manage their condition, such as smoking-cessation programs.

“It can happen that individuals who have had a mild stroke have deficits that are not easily identified when they are in the hospital,” says Nancy Cox, Coordinator of Rehabilitation programs at Constance-Lethbridge and the Richardson Hospital. “It is only once they are back in the community, trying to resume their usual roles and responsibilities, that they become aware of difficulties in the aftermath of their stroke. Is fatigue impacting their ability to work? Do they exhibit signs of depression that are affecting their family life? Do they feel uneasy driving downtown, owing to visual problems? The nurse in the Stroke Secondary Prevention Clinic is ideally situated

to help ensure that these clients do not fall into a gap in their care. She can refer a client back into the trajectory for rehabilitation services at Constance-Lethbridge, whose specialized teams will focus on social integration.”

Ms. Cox notes that the Stroke Secondary Prevention Clinic nurse paid a visit to Constance-Lethbridge to meet members of the rehabilitation teams. “She is learning about the full scope of our clients’ needs, directly from the staff who provide different forms of specialized care,” remarks Ms. Cox. “When she needs any clarifications about how to direct a client who has come to meet her in the clinic, she will know exactly whom to contact and how best to reach them, so that they can decide, together, on the appropriate path of care. This is where we have an impact, as an IPU.”