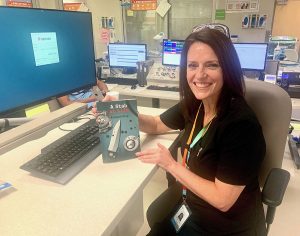 Note: Author Richard King died of cancer on January 2. Two months before his death, he praised the care he was receiving at the JGH’s Segal Cancer Centre. “No one likes having cancer. No one likes having chemo. But if you have to go through it, better at the Jewish than anywhere else in the world,” he told the 360° Newsletter. Mr. King refused to be negative in his outlook. “I have a great support network of family and friends, including Maggie. I take one day at a time, and I don’t think farther ahead than the next procedure.”
Maggie Quinsey says Mr. King “handled his cancer with grace.” He is remembered for his positive impact in the JGH Emergency Department, where he worked as a volunteer. “Richard was the most kind-hearted person I know. His humour was always appreciated by our triage team and he never hesitated to help wherever he was needed. He will be missed by all,” Ms. Quinsey says. One of the ED registration clerks offers a sense of his influence on others. “She told me that Richard was the reason she had books on her shelf,” says Ms. Quinsey, who also expresses her personal loss. “Richard was a dear friend to me. I feel I lost a piece of myself.”

As an Emergency Department nurse for 20 years, Maggie Quinsey has come to expect the unexpected. But she was hardly prepared for the latest twist in her career: Becoming the inspiration for a character in a Montreal mystery novel.

In A Stab at Life, the first book in a crime series by Montreal writer Richard King, a quick-thinking triage nurse named Annie Linton teams up with her police detective-boyfriend to solve a string of murders, using her diagnostic skills from the ED to fight crime on the streets.

That “nurse turned sleuth” is based on the real-life Ms. Quinsey.

“Nurses are brilliant diagnosticians,” Mr. King explains. “There’s very little difference between nurses’ diagnoses and the skills you need to solve a mystery: You look at all the available evidence, use critical thinking and form a conclusion.”

The path that led Ms. Quinsey from the JGH to the pages of a whodunit began in 2008. Mr. King was treated at the Jewish General Hospital ED for an irregular heartbeat and, though he was discharged the next day, he decided to return as a volunteer.

It was during those evenings, as he helped direct patients in the ED, that Mr. King met and got to know Ms. Quinsey. The two bonded over the fact they had both lost their mothers at a young age (“an exclusive club you never want to join,” Mr. King quips). But he was also impressed by the compassionate nature of Ms. Quinsey, who, even in high-stress moments as a triage nurse, found the time to place a calming hand on the arm of an anxious patient.

“All nurses are compassionate creatures,” Mr. King says, “but she had a way of relating to patients that was unique.”

The novel is set in Montreal’s Côte-des-Neiges district and brings to life the intense, fast-paced world of the ED at the JGH—known in the book as Gursky Memorial Hospital, in homage to writer Mordecai Richler and the fictional family of Solomon Gursky Was Here.

Ms. Quinsey says she’s honoured to serve as the model for a protagonist who’s described in the book as both “fast on her feet” and “warm and comforting.”

“I’m just a regular Joe,” she says. “I’m no different from anyone else. And it was never in the cards for me to become a nurse.”

Ms. Quinsey explains that she came out of a difficult home life in Montreal and spent time in foster care. It took a supportive high-school teacher to help her complete her secondary education and enroll in the nursing program at John Abbott College. She joined the JGH after graduation and has remained for the better part of 30 years.

Her own source of inspiration for nursing came at an early age. She underwent four surgeries and multiple procedures at the Shriner’s Hospital for a club foot and a degenerative limb defect before the age of 12, and vividly recalls the nurse who tended to her when she underwent painful spinal taps.

“I remember how the nurse just held me,” says Ms. Quinsey, choking back tears at the memory. “My home life wasn’t very good and I got the attention I needed in hospital. That nurse made me feel special. She was an angel.”

As for Mr. King, who remained a JGH volunteer for over a decade, he’s now observing the hospital from yet another vantage point. In August, he was diagnosed with liver cancer, and is now being treated at the JGH’s Segal Cancer Centre.

Like his previous experiences at the hospital, this latest one has given him an insider’s look at the dedication of JGH staff. “Everyone is compassionate and considerate. Under very trying circumstances, they’re able to deliver excellent care to patients.”

The common thread that runs through Mr. King’s experiences – as a patient, volunteer and now as a patient again – remains his admiration for nurses. “They’re the glue that keeps everything together.”

Richard King’s family wishes to express its sincere gratitude to the doctors, nurses and support staff of the Segal Cancer Centre and Palliative Care Unit of the JGH for their dedication to the well-being and comfort of Richard and all of their patients. Contributions in his memory may be made to The Richard King Memorial Fund https://jghfoundation.crowdchange.co/14038/page/335467 [2] at The Jewish General Hospital Foundation (or by calling 514-340-8251), or to the charity of your choice.

A Stab at Life is the first in a series of mystery novels featuring Annie Linton and partner Gilles Bellechasse. Along with the second book in the series, Banking on Life, it’s available on electronic platforms and wherever books are sold. Mr. King is the former co-owner of the Paragraphe Bookstore in Montreal. A Stab at Life is dedicated to Ms. Quinsey’s mother, Margaret Noseworthy, who died in 1981