In recent weeks, CIUSSS West-Central Montreal has distinguished itself on the global stage, reflecting the compassion and special care we take to safeguard the well-being of individuals.

I would like to extend my warmest congratulations and sincerest thanks to each and every employee of the Jewish General Hospital for outstanding service that has resulted in the JGH being ranked among the top 100 hospitals in the world.

A survey for Newsweek magazine also rated the JGH the top hospital in Quebec and fourth among all hospitals in Canada.

While the accolades themselves are extremely gratifying, the real reason they are a source of pride is that they represent the focus we bring to patient-centred care and the patient experience, as well as our unceasing determination to improve quality, delivery and access to treatment and care. These qualities are all the more vital, given the crucial role that the JGH plays at the heart of CIUSSS West-Central Montreal.

The credit for this achievement belongs to everyone: those who have hands-on contact with patients (doctors, nurses and allied health professionals), employees in a broad range of non-clinical fields (Housekeeping, Finance, Security, IT and much more), our legion of loyal volunteers and our numerous and extremely generous donors. Each individual plays a unique and invaluable role in ensuring that our hospital is attentive, responsive and supportive toward patients and their families.

Since the day it opened in 1934, the JGH has been tireless in striving to provide care that is technologically sophisticated, while instilled with compassion and mindful of the emotional, social and psychological needs of those who rely on us. Thanks to you, we are continuing to honour that 85-year legacy, while preparing to meet new challenges alongside leading healthcare institutions from around the world.

CIUSSS staff are moving from strength to strength

Everyone who was involved in the flawless, day-long move of 66 residents from the Jewish General Hospital back to the Henri Bradet Residential Centre is to be warmly congratulated. 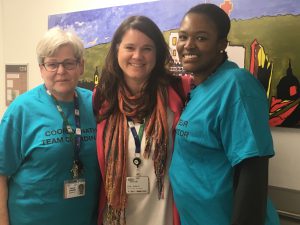 Most of the residents had left Henri Bradet in July 2017, so that improvements could be carried out to the building—and now they were returning to an extensively renovated facility. For those who had been admitted through the JGH, it was their first look at the modern, bright and airy accommodations that have now become their home.

Staff and volunteers in all areas—including Nursing, Housekeeping, Technical Services, Food Services, Recreation, and more—ensured that residents were taken smoothly and promptly from the transport vehicles to the waiting area in the dining room, and then to their own newly prepared rooms.

In fact, the entire operation was handled so efficiently that it ended half an hour ahead of schedule. Meanwhile, families were kept fully up to date about the location of their loved ones.

The atmosphere was cheerful throughout the day, with warm smiles at every turn. Happy to back in familiar surroundings, several of the residents joined members of staff in singing and dancing.

Thank you to everyone who participated and ensured that the safety, comfort and well-being of the residents was their top priority.