A collection of diplomas and certifications adorn the walls of Etienne Nikiema‘s office at the Jewish General Hospital, all neatly framed and evenly arranged. Yet more certificates are stashed in his cabinet drawer. At Mr. Nikiema’s home, prized reading material includes a set of Larousse dictionaries and encyclopedias.

“I love discovering,” says the manager at the JGH Radiology Department. “I believe that studying opens your spirit.”

Mr. Nikiema’s traces his high regard for learning to his upbringing in Burkina Faso, a small country in West Africa. “There, it’s valued to be educated,” he explains. “In Africa, it’s often the best way climb the social ladder. But there are less opportunities.” 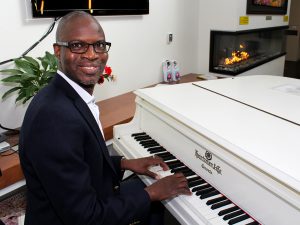 After earning a diploma in Radio-Diagnostics, a certificate in Finance and Accounting, and a Master’s degree in Management Sciences in Burkina Faso, in 2007 Mr. Nikiema emigrated to Montreal.

“I had a desire for adventure,” he says. “North America intrigued me, but Canada even more so because it’s bilingual.” French is his first language, so Montreal was a natural option.

“I’m always looking for programs or courses that can bring value to my job as a manager in healthcare,” he says.

Mr. Nikiema is responsible for the MRI, CT Scan and Interventional Radiology divisions within the JGH Radiology Department, with more than 30 employees. His approach as a manager is simple: humanistic and patient-focused.

“I really like being on the ground, because that’s where I came from,” says Mr. Nikiema, who worked as a medical imaging technologist for 18 years. “It’s important for me to remain close to my team and the patients. When I’m with a patient, I’m not dealing with a number, but a person who is coming for a service.”

When he began his role in November 2016, the average wait time for an MRI was more than a year. Today, the average is down to three months, or two weeks for cases that do not require contrast infusion.

But such accomplishments don’t come without challenges, and Mr. Nikiema believes it’s the difficult situations that really enable him and his team to learn, grow and impact the lives of patients.

“You can serve 150 patients where it’s business as usual, but it’s in solving the tough problem with that one patient where you feel like you’ve really made a difference,” he notes.

He recalls one incident involving a patient who did not show up for several appointments. Ministerial policy dictates that after a certain number of missed appointments, the patient and referring physician are informed that the patient will be removed from the waiting list.

Initially unable to reach the patient, Mr. Nikiema did some searching and found the contact information of their long-term care site. He discovered that the individual was disabled, recovering from brain surgery, and unaware of ever having booked or missed appointments. Mr. Nikiema made arrangements with the facility to transport the resident, and to have them accompanied and examined at the hospital.

“There is always a context that you have to take into account. You never know what the patient is dealing with,” Mr. Nikiema says. “When you take the time to go the extra mile, you get real satisfaction. If we’re able to offer our best service to the patient, we must do it.”

His team must also be empowered to provide excellent care, he adds. Part of that involves including them in project development and discussion.

“I might have a good solution for a problem, but their ideas open the door to new possibilities. At the end of the day, they are the ones doing the work on the ground.”

When Mr. Nikiema arrives each morning, he does a tour of the team. Whether he’s making them laugh or resolving a problem before patients arrive, he’s there for support.

”I feel like I have respect from my team because I’ve done what they’ve done,” he notes. “They feel understood, because I can relate to the demands of their work.” As much as providing feedback and giving thanks is vital, he also regularly asks for comments from his team about his own work.

“If I have an interaction or a relationship with someone—be it a member of my team or a patient—it’s important to me above all else that they feel valued.”

You Make the Difference

To nominate a member of CIUSSS West-Central Montreal staff who goes above and beyond the call of duty, contact Laure-Elise Singer at lsinger@jgh.mcgill.ca.