While many CIUSSS West-Central Montreal employees pick up their forks at lunchtime, staff from the Finance Department at CLSC Benny Farm are grasping their knitting needles.

Every Wednesday during lunch hour, the Knitting Bees Club gets together to work on personal knitting projects or charitable initiatives. The club recently donated nearly 100 knitted hats in every colour of the rainbow to premature babies in the Neonatal Intensive Care Unit at the Jewish General Hospital.

“For us, it’s about engaging in an activity we enjoy, and unwinding,” says André Charbonneau, one of the club’s two founders and Executive Assistant in the Department of Finance. “It’s nice to have a place where we can put our jobs aside, decompress and talk about something we love doing, while doing something for others.”

The idea to form the club came about when Mr. Charbonneau knitted a pair of slippers for his colleague Johanne Dugas, his secret Santa recipient in 2017.

“I was amazed to find out he knit,” recalls Ms. Dugas, club co-founder and Administrative Technician in Payroll Services. “We began sharing techniques and soon decided to start a club to see if other staff members were interested.”

Since the first knitting session between just Mr. Charbonneau and Ms. Dugas in January, they have welcomed nearly a dozen knitters to their weekly gatherings. Colleagues that joined ran the spectrum from never having picked up a set of needles to those who are learning complex stitches.

“Every week we try to help people advance their knitting techniques,” says Mr. Charbonneau. “I find it really fun. It brings people together who have a common interest. It’s really important to have that with your colleagues.” During the hour, the group refrains from talking about the workplace, focusing instead on their needles. 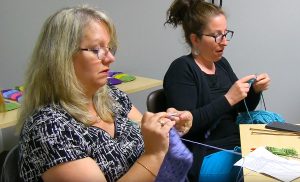 In February, when the group proposed to the Department of Finance the idea of knitting baby hats for preemies, colleagues were quick to donate to the cause.

“All of a sudden, people’s wallets were opening up,” says Ms. Dugas. “I researched what kind of wool was accepted, we ordered it, and got right to knitting. We thought the hats were something easy new knitters could do.” The Knitting Bees want to knit hats for term babies next.

“Anybody who works in the health system is already someone who likes to give of themselves,” says Ms. Dugas. “We feel really accomplished that we’re doing something good and kind.”

Come fall, the Knitting Bees have bigger benevolent projects planned. Ms. Dugas says the group will work on 12-by-12 inch squares, which will be formed into blankets and given to the homeless. Mr. Charbonneau adds they hope to knit socks for the same cause. For the more advanced knitters, they’ve discussed knitting prostheses for breast cancer survivors.

“There are no limits. We are open to all projects and causes,” says Mr. Charbonneau, who adds the group has asked to bump up the meet-ups to twice per week in the fall. “The more people who are interested, the more we will have donations to buy wool, and the more ambitious the projects we can create.”

CIUSSS staff members interested in making donations to the Knitting Bees Club or joining the club are asked to contact Mr. Charbonneau at acharbonneau@jgh.mcgill.ca.