They fled their countries alone, but entered ours with a guiding hand.

Three refugees who benefitted from help offered to asylum seekers as part of a unique program in Canada, PRAIDA, shared their stories on World Refugee Day 2018.

They escaped different forms of persecution in their native countries, traveled from different corners of the world, but lived one common experience—they all left behind their loved ones, and embarked on their journey to safety alone.

“By leaving family and friends and starting their lives from scratch, these three people have shown tremendous courage and resilience,” says Kahina Slimani, the Coordinator for the Regional Program for Reception and Integration of Asylum Seekers (PRAIDA) for CIUSSS West-Central Montreal. “They arrived on our shores alone and isolated, but alive.”

PRAIDA has welcomed and integrated asylum seekers to Quebec for six decades. “The program is unique in Canada for its longevity,” points out its Clinical Coordinator, Marian Shermarke. “The program is also noteworthy because it’s provided within the health and social services sector. That means the Quebec government recognizes the vulnerability of this population, not only from an emotional perspective but also with regards to health.”

Helping the vulnerable, helping ourselves

A bleak picture of the vulnerability of asylum seekers emerged, as figures published on World Refugee Day revealed that in the five consecutive years leading to 2017, war, violence and persecution drove worldwide displacements to record levels, according to Denise Otis, a Protection Officer at the United Nations High Commissioner for Refugees (UNHCR).

Ms. Otis gave an overview of the plight of refugees:

• 85 per cent come from developing countries
• Of those, two-thirds flee from Syria, Afghanistan, Myanmar, Southern Sudan and Somalia
• 44,500 people are uprooted daily, or one person every two seconds
• 53 per cent are children, many unaccompanied, separated from family
• The total number of countries opening their doors is low, with the majority taken in by 10 countries (principally Turkey and Lebanon)
• Economically advantaged countries (with the exception of Germany) are not taking in the highest rates

“Behind these numbers are people who are often suffering, living in penury and perilous conditions,” notes Ms. Otis. “Thankfully, in Quebec there are many positive practices, many people who are welcoming and hospitable toward refugees. Just look at us gathered here today, we’re showing solidarity not only for refugees but the community that supports them—PRAIDA, SHERPA, the CIUSSS and our volunteers.” Beyond granting free health and social services, PRAIDA also provides temporary accommodation, when necessary.

“Helping asylum seekers to rebuild their existence engages us all,” says Mr. Otis. “We’re all implicated in helping them to achieve what most of us take for granted—an education, a place to live in security, employment, a sense of belonging to a community. The impact on the lives of the refugees is considerable, but also for the communities that take them in.”

Those sentiments were echoed by Cécile Rousseau, Scientific Director of the SHERPA Research Centre. “We’re hopeful for the long-term integration of refugees, because the data confirms that humans can overcome the trauma to lead healthy lives—physically and mentally,” she says. “In turn they can become exceptional, precious contributors to our society. Far from being a fiscal burden on our education or health systems, they will enrich us.”

The PRAIDA event on World Refugee Day was organized in partnership with the CIUSSS West-Central Montreal Department of Communications and Media Relations.

“You don’t know what I’ve been through. I had a very good life, when I came here I downgraded and had to start all over again. I was a lawyer with a very good job, helping people like you. But now I am seeking help from others.”

“I left my family, my friends, my good memories, my career. When I arrived here, people treated me well, better than in other countries, but that still doesn’t fill the emptiness that was left in my heart.”

“I have to start again, but where to start? Maybe you see me in the street, I am smiling, but I am alone. When I left home I had to leave without saying anything to my family. I am the oldest in my family, a source of income for them, now it’s all cut. It hurts me a lot.”

“When you have to choose between the good and the bad, everyone goes for the good. But how do you chose between two bad options? It’s strange and difficult to make this big decision in two to three hours.”

“Both of the ways are hell, leaving home, or staying home and doing things you don’t want. You study law, you know human rights, you know about freedom of beliefs, freedom of expression, but then people ask you to do things you can never accept, do you say, ‘ok, I’ll go with the flow and do what they ask of me’, or do you leave your home country and start from scratch?”

“I was shocked when on the first day I came here the social worker was trying to give me some social support—that’s what I was doing for other people, I was helping people who were down, just imagine in 24 hours” [the situation reversed, signals with arm gestures].

“Sometimes I think I made a mistake. I’m human, maybe I should have done the things they asked, I am positive and I believe in the future, but humans have limitations.”

“You feel down because people are very judgmental. Some closed-minded people don’t even hang out with you. But I don’t blame them because it’s a matter of trust, they don’t know you.”

“I have more challenges to overcome, I had a job and lost it because I couldn’t speak French. The future is good but it takes time and courage.” 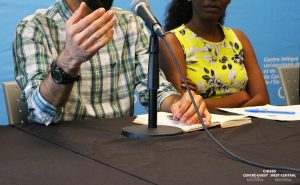 Asmaa, from Sudan, a refugee for reasons of gender discrimination

“Life became insecure for me, it became very difficult. I was arrested anytime I attended a demonstration against the government as a woman. Women in Sudan are forced by their family to get married at a very young age, even at 11. In education, in work, we don’t have the right to speak or travel without permission from our father, brother or uncle.”

“We are second citizens in Sudan, being women. Eighty-six per cent undergo circumcision, there are very bad practices against women. Sometimes they present it as religion or tradition, but it’s just to gain power. If you wear trousers and go outside, the police can beat you, you can be arrested just for such a simple thing.”

“I can’t say that I left a better life, but financially of course, the social status is different. Here nobody knows me, but I am secure. We’re not facing gender persecution. It’s a new start for me, new country, a hard winter.”

“I am positive, in one year as a refugee I see the change. To show the brown ID, it’s not accepted everywhere, it can be very embarrassing, it depends where you are and who is the person in front of you. It’s good that I came to PRAIDA, it is the first place I received help and guidance, where to go, how to register. Learning the language is part of integration, the free courses are a help. I am now working, I speak French comme si comme ça. We are in the process of joining everything we have to, to integrate.”

“Being a refugee is not being a criminal. I want to do my Master’s degree, I’m an HR professional, I’d like to continue. Many of us refugees could come as immigrants. So I want some people to change the idea they have. We need some patience at the beginning, we will contribute.”

Diego, from Columbia, a refugee because of his homosexuality

“I am here because it is not safe for people in Columbia to be gay.” 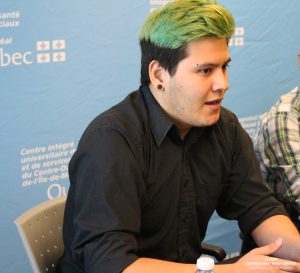 “It’s hard because you can read in the news that it is a safe country, but it’s one thing what you read, and another what you live.”

“All of the people in Columbia are focused on being normal. My family is Catholic, they don’t believe in man and man or woman and woman, so when I was 18 I fled and eventually found a way to come to Canada.”

“I was very scared. I didn’t know what was in front of me. I didn’t know if I’d have to go back to my country or if I could have a life here. Canada opened its door to me. I have good opportunities, I am accepted, I am happy, but at the same time I’m not. You miss your home. I have been two years without seeing my mom, and it’s hard, because in the end, family is all you have.”

“You become a refugee not because you want a better life, but because it’s something you need in order to live. In Columbia I had to pretend that I’m straight. I even had a couple of girlfriends. Right now I feel free, I can put more earrings or tattoos and not get judged, I feel safe.”

“I don’t blame Canadians who are fearful of refugees. They think you’ve done something bad in your country. At first, I was a little ashamed so I told people I was here on a student visa, but then I told myself there is nothing wrong with being a refugee.”

“When I meet new people, they try to help, they are respectful, some people say, ‘he’s strong, he’s trying to get a better life’. I actually don’t feel judgment from people, because I’m really focused on what I want, I am just watching the front, not to the sides and behind. You have to know how to talk with people without being rude.

I was a volunteer for PRAIDA, it was most helpful. I found amazing people at the YMCA, they really helped me with everything, how to find places, a school and apartment, a job, telling me the bank food is free. The help is there, but you have to accept it. Sometimes people say it’s not enough, if you try to accept it you’ll see you have a lot.”