Health and Social Services Minister Christian Dubé visited the Jewish General Hospital for a first-hand look at the Command Centre and other digital innovations at CIUSSS West-Central Montreal, describing them as “models” for other health networks across Quebec.

Accompanied by CIUSSS President and CEO Dr. Lawrence Rosenberg and several senior managers, Mr. Dubé was given a tour that highlighted some of the cornerstones of our network’s digital transformation strategy and our vision of delivering better patient care through innovation. The minister visited the Command Centre’s base of operations and its satellite setup in the Emergency Department, ending with an information exchange in the main-floor boardroom.

Throughout, Mr. Dubé asked detailed questions about the operation and practical aspects of the systems, interjecting on numerous occasions: “I’m impressed.”

“There are several models to follow here,” Mr. Dubé said in a brief interview with the 360° Newsletter after the tour.

As examples, he cited the CIUSSS’s use of digital technology to manage patient flow—both within the JGH and in tandem with CIUSSS partner sites in Rehabilitation.

He also praised the CIUSSS’s “capacity to rally everyone toward better efficiency.”

The tour gave him an inside view of the trend-setting innovations that he identified publicly in March as advances he’d like to see emulated as the province sets out to reform the healthcare system.

In the Command Centre’s base on the second floor of Pavilion B, Mr. Dubé stood before a bank of video screens and was shown how the dashboards display real-time information about patient status and a variety of other data. Moving downstairs, the minister was given an overview of the Emergency Department’s satellite Command Centre from Dr. Marc Afilalo, Chief of Emergency Medicine, who said the innovation was a “masterpiece.” Mr. Dubé echoed the sentiment by calling it “a work of art.”

The ED’s Command Centre makes it possible to get a much clearer idea of how Emergency patients are moving through the department and how many of them will probably have to be admitted to the hospital for treatment.

“Bravo to the whole team for its leadership.”

Mr. Dubé also exchanged with managers about pioneering developments such as our CIUSSS’s use of HoloLens smart glasses, our Hospital@Home program and virtual ward, and the network’s overarching philosophy of delivering “Care Everywhere.”

The visit, which ended with a private meeting with Dr. Rosenberg, appeared to confirm the minister’s view that the CIUSSS’s advances offered a template for the future.

“I’m always looking for best practices in the health network, for examples that we can use, so that all the CISSS and CIUSSS establishments can advance more quickly,” he said. “I’m pleased to see that there will be a lot of examples to follow here.”

On Twitter, he added: “Bravo to the whole team for its leadership.”

Dr. Rosenberg said he was pleased the Health Minister has taken such a strong personal interest in our CIUSSS and, in particular, in what has been achieved collectively at the JGH.

“I’m extremely gratified that Mr. Dubé was so impressed by our digital Command Centre and its satellite in the Emergency Department,” he said. “When I and our senior managers spoke with him, we noted that, ultimately, our technological innovations are there for the benefit of those who receive health care and social services in our CIUSSS,” he said.

“I’m extremely gratified that Mr. Dubé was so impressed by our digital Command Centre and its satellite in the Emergency Department.”

Dr. Rosenberg added: “We told him our aim is to improve the quality of care that’s focused on the needs of users, while delivering ‘Care Everywhere’—that is, making care available in whichever setting is most appropriate, safest, most convenient and most comfortable for the user.

“In addition, we made it clear that our innovations will mean better health outcomes. These improvements will be evident in the data that we continuously collect, as we document our performance and demonstrate the extent of the positive changes in patient flow and care.”

Mr. Dubé, who announced on the day of his visit that he will seek re-election in October, said just before leaving the JGH: “We’ll be back more often.” 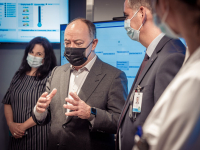 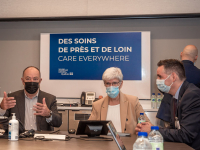 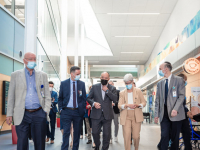 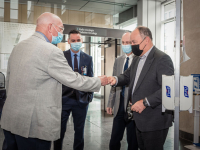 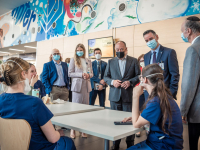 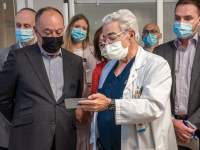 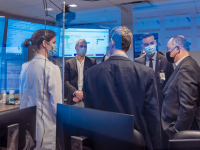 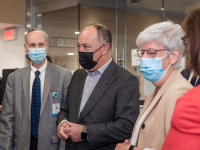 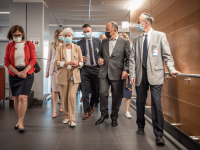 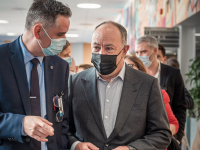 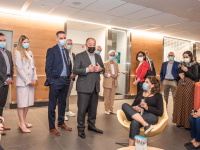 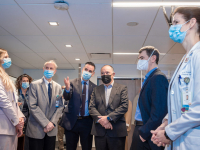 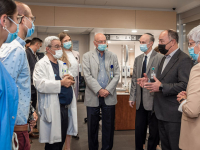 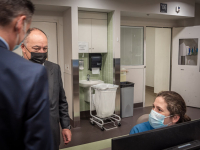